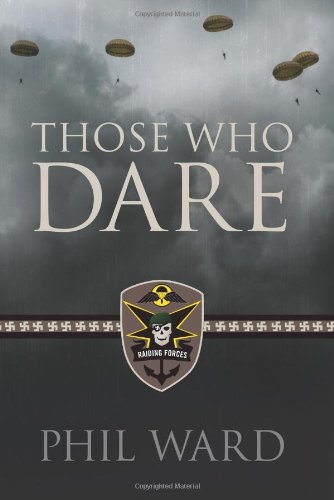 Those Who Dare: Book One in the Raiding Forces Series (Second World War Fiction)

The first in a series of meticulously researched World War II novels about hit-and-run raids against Hitler’s war machine by British forces – under the command of a U.S. soldier – “Those Who Dare” is sure to appeal to avid military fiction fans. By May 1940, panzer divisions had decimated Belgium and reached Calais. Lieutenant John Randal of the U.S. 26th Cavalry Regiment volunteers his expertise to help slow their advance. What unfolds is a blend of military guerrilla tactics, suspense, humour, cultural and social commentary, and war buddy camaraderie – plus a little romance between the American GI and the widowed Lady Jane Seaborn. Along the way readers meet such colourful characters as Captain David Niven in MO-9 and Captain ‘Geronimo Joe’ McKoy with his Travelling Wild West Show and Shooting Emporium. The author – a decorated combat veteran – covers the details of war extensively, from the five points of contact of a parachute landing fall to descriptions of a British raider’s A-5 flinging ferries before the first 12-gauge shell casing hits the floor. As the novel ends, Major Randal’s men, fresh from Operation Tomcat in France, learn they will deploy via sea transport within 48 hours on their next mission. The second book, which is already written, tells that tale.

Dark Psychology and Manipulation: Why are People with Dark Personality Traits More Successful?

Never Mind, We'll Do It Ourselves: The Inside Story of How a Team of Renegades Broke Rules, Shattered Barriers, and Launched a Drone Warfare Revolution

Blockchain Democracy: Technology, Law and the Rule of the Crowd